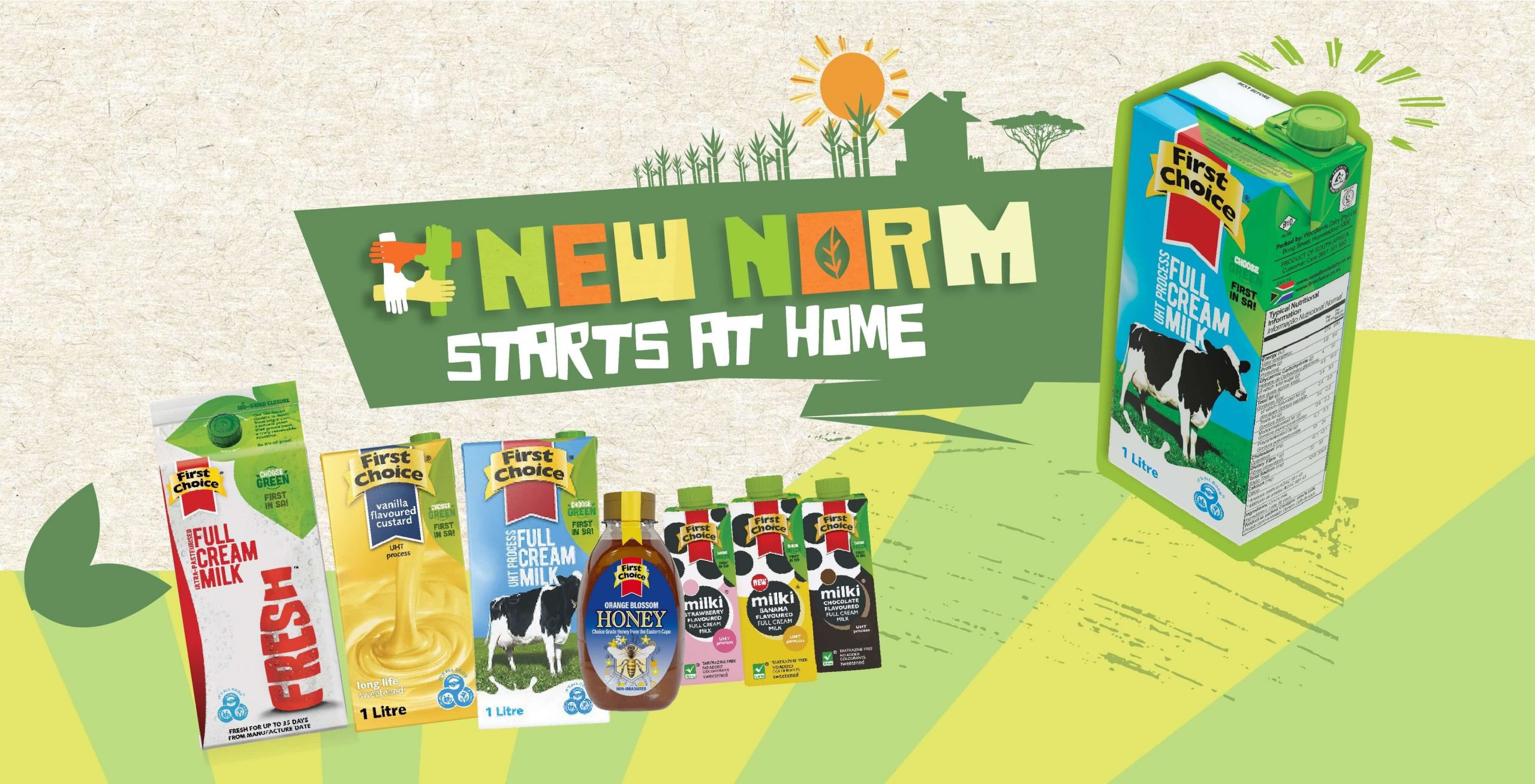 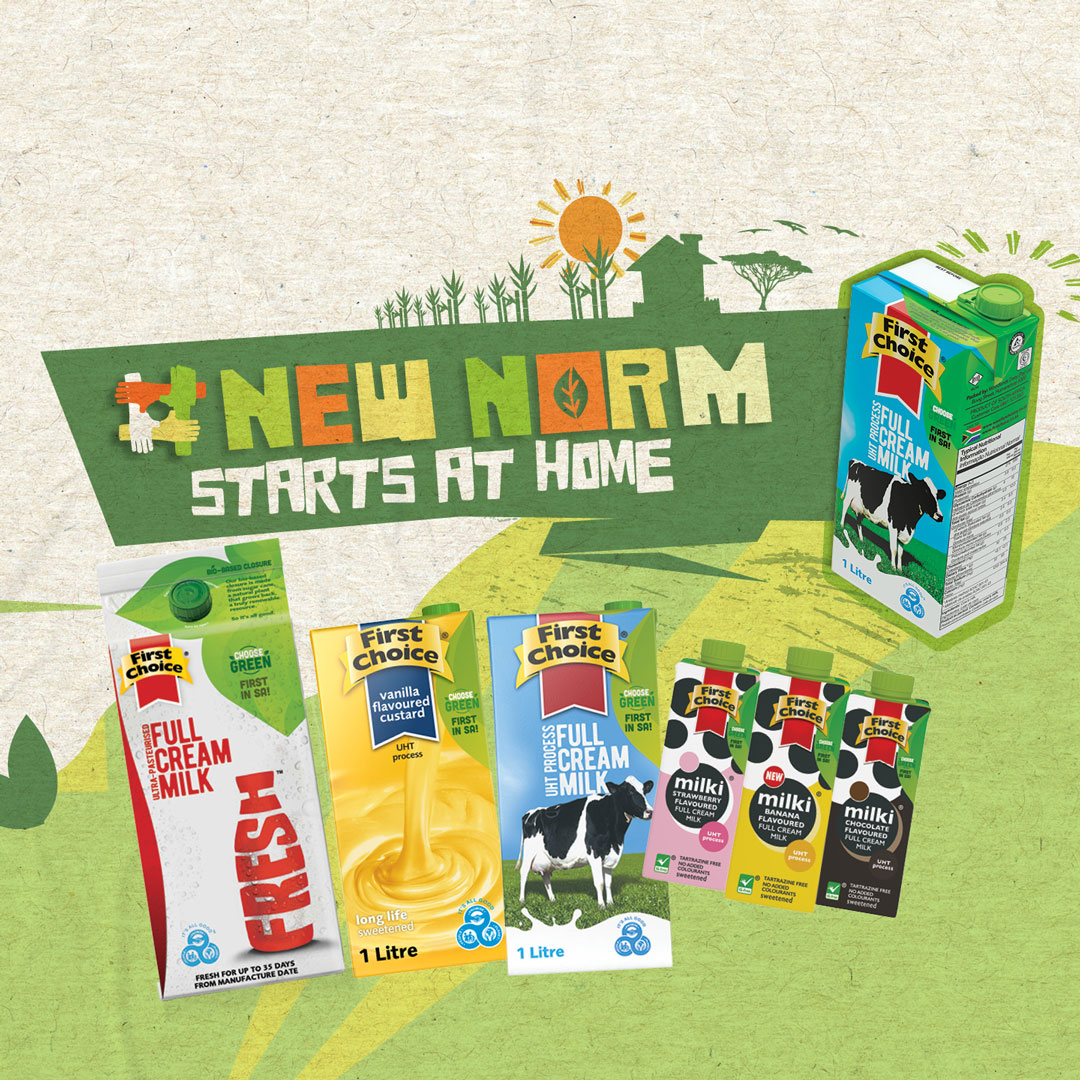 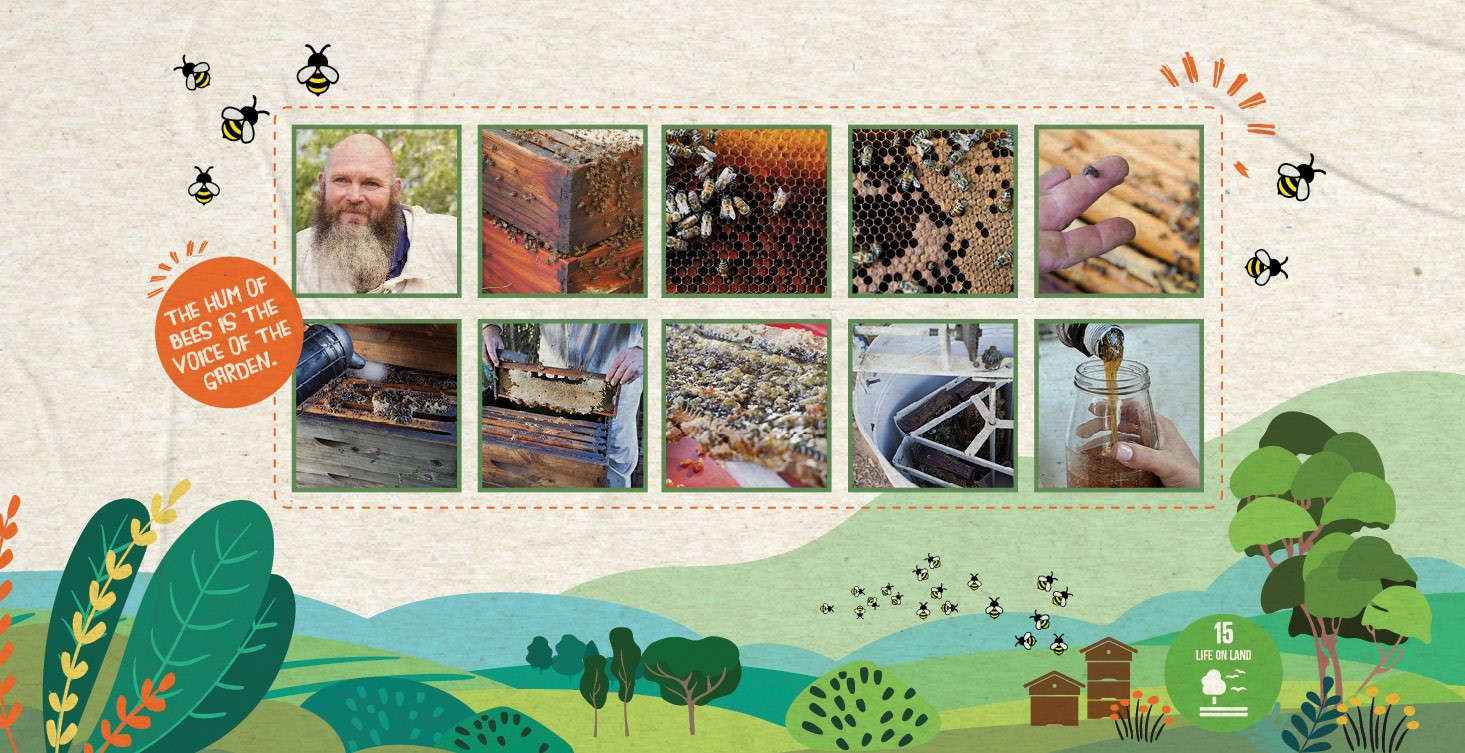 Behind every drop of honey are some hard-working faces: that of the faithful beekeeper and those of our honeybees. The beautiful relationship between keepers and bees gives us the liquid gold that we so love. So let us delve into the lives and hives of our industrious little friends.

Honeybees have three social tiers, each with a specific set of roles that divide all labour inside a colony. The colony is made up of thousands of individuals functioning as a whole. Each hive consists of the queen, drones and worker bees.

The queen is the only reproductive individual in the colony. The queen mates with up to 80 drones; she will lay all of the eggs for the colony, “deciding” when to lay drones (unfertilized eggs) and when to lay workers (fertilized eggs). These bees are born and nurtured by the other bees in the hive until they are fit enough to assume their roles.

All worker bees are females. They do all of the foraging, feeding of the young, honey production and storage, and all the wax production, cleaning and defending the hive against intruders. Each worker bee will do a variety of jobs in her lifetime; the older they get, the riskier her job and will be the one who ventures the furthest from the hive. The only male bees in the colony are drones. Their sole purpose is reproduction. Once they mate, they die successful bees. Unsuccessful drones return to the hive to eat honey and pollen, but once swarm season is over, drones become a drain on resources inside the hive and are evicted by workers.

So how where do beekeepers come in? The primary duty is to keep hives healthy and productive so that they can yield honey, beeswax and propolis.

Each hive is made up of supers (the large square boxes layered one on top of the other), the brood chamber, queen excluder and frames.

Inside the stacked supers are the frames. These are the internal structures that are a densely packed group of hexagonal prismatic cells made of beeswax, called a honeycomb. The bees use the cells to store food (honey and pollen) and to house the brood (eggs, larvae, and pupae). Beekeepers may also sometimes ‘jumpstart’ the honeycomb making process by inserting a layer or two of beeswax simply because it takes so long to make. They will fill a small section of the frame to give the bees a little assistance. The workers then layer the beeswax and begin to form honeycomb.

So, where does the honey come from then? Honeybees extract the nectar from the flowers and then transport it back to the hive where they deposit it into the honeycomb. At this point, the nectar is not yet its usual thick consistency that we use. The bees first rapidly fan their wings to remove all excess water from the honey turning it beautifully thick. When most of the water has been evaporated, they seal the honeycomb with a liquid that will become the beeswax. This protects it from air and water as it’s stored safely. This stored honey will also become food for the bees. Propolis is also made by the bees, which is their ’bee glue’. It is used to seal off any unwanted openings in the hive and is a very valuable commodity. Propolis and its extracts have numerous applications in treating various diseases due to its antiseptic, anti-inflammatory and antioxidant properties.

Honey’s colour, taste, aroma and texture will depend on which flowers the bees choose to frequent. And just 1 1/2 teaspoons of this lovely golden goodness is made per bee in her lifetime.

We may be able to live without honey, but a world without bees is simple, not possible. Without bees, there would be fewer seeds, fewer flowers, and so lowered rates of pollination. This, in turn, alters ecosystems. With ecosystems at risk, many animals will die off, which would also impact natural systems and food webs. Simply put, no bees – no humans. So look after our little flying friends by planting all things green in your garden.

A word from our beekeeper, Gavin Botes, “In 2019 the decline of the honeybee population was recorded at a staggering 44% and this declining number continues to rise, year on year. It is a privilege to take hands with a company like Woodlands Dairy, makers of First Choice branded products, where sustainability and the well being of our environment lies at the core of all their activities. Through their investment and support, I have been able to grow the bee population I service and harvest honey from. I gladly supply them with honey. Not only does the customer get an excellent product, our honey comes with the assurance that everything possible is done to grow the bee population and preserve the availability of this precious commodity for generations to come.” 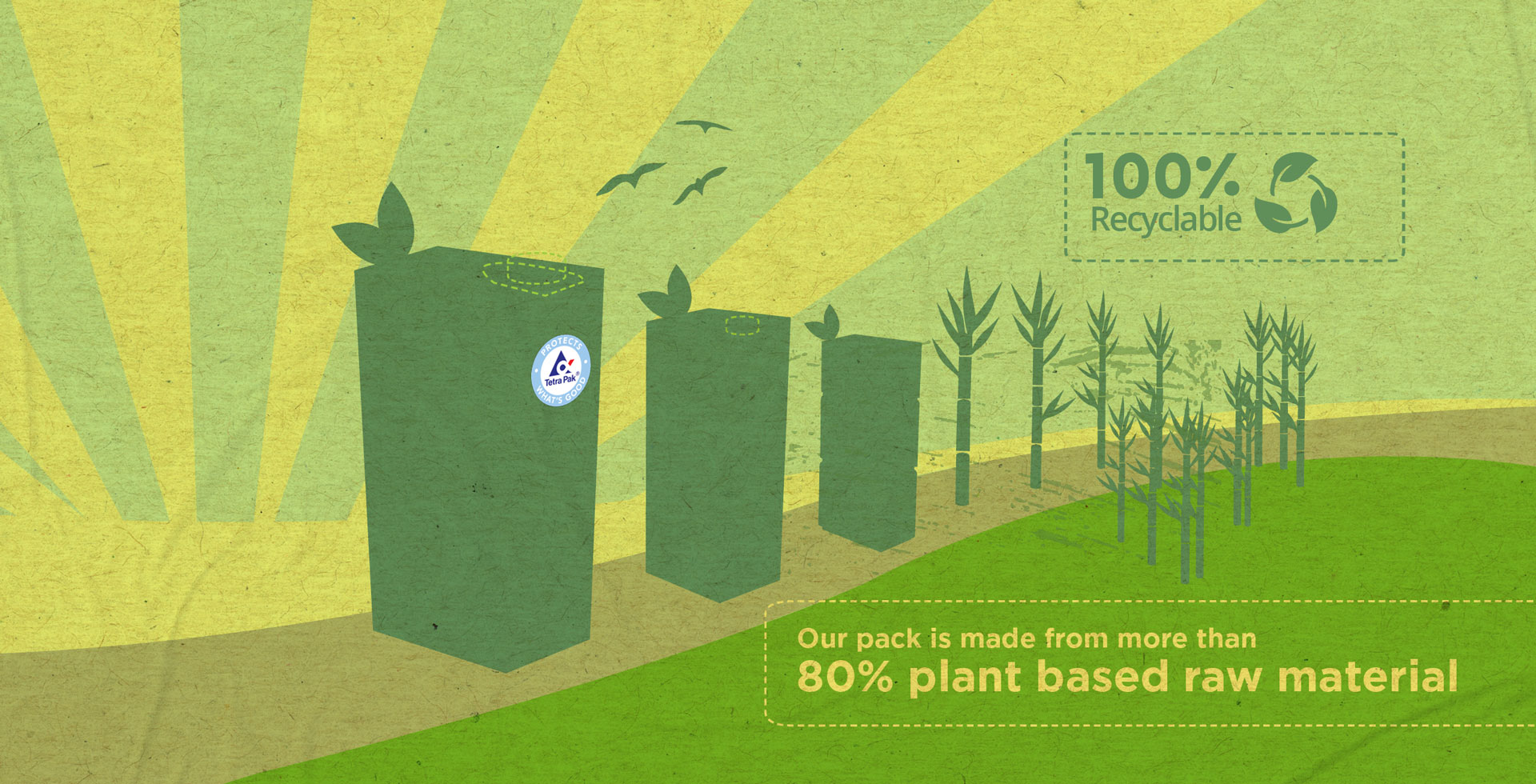 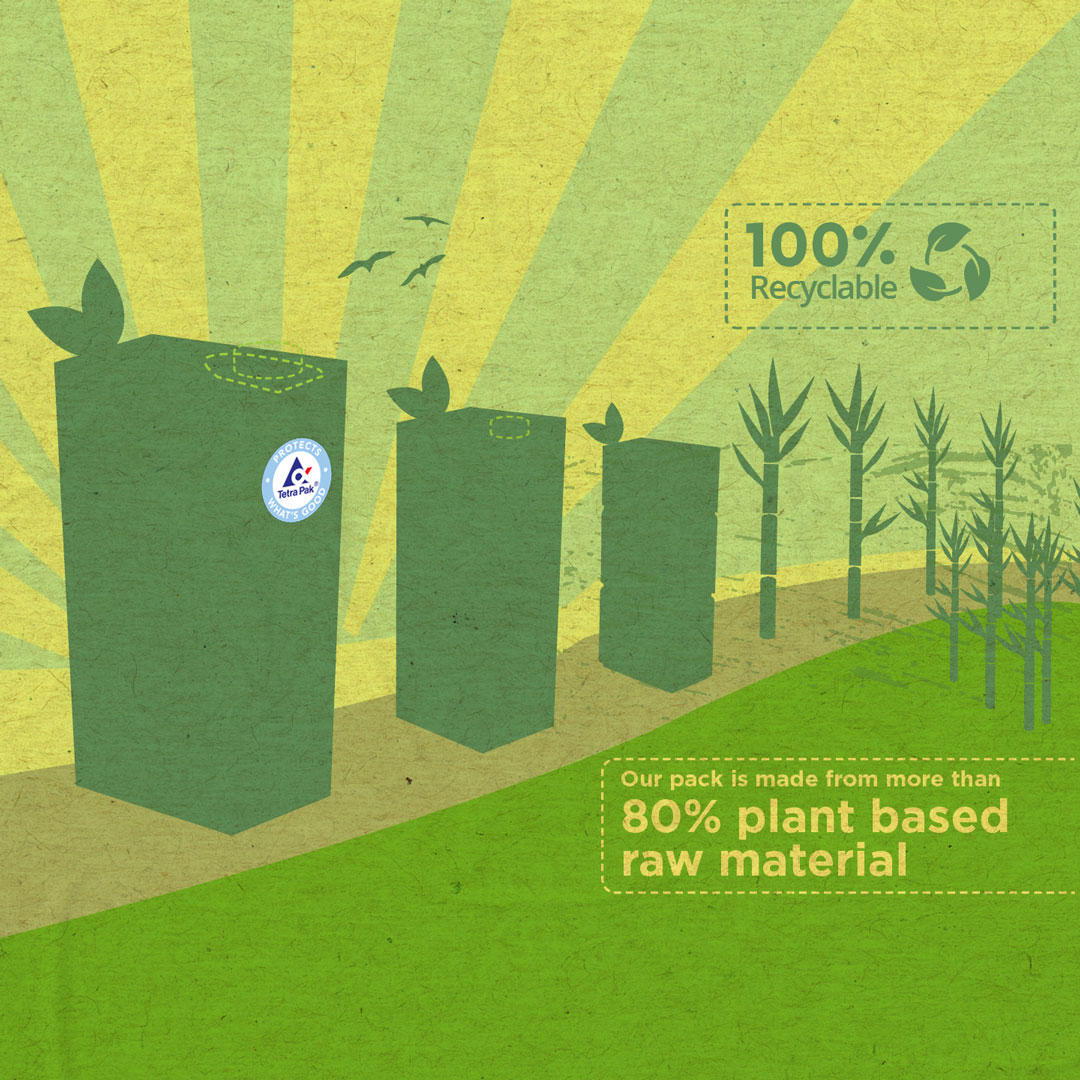 Thanks to our partnership with Tetra Pak, we were the first dairy in South Africa to introduce closures that are partly made from bio-based material.

By making this small change on our pack, we’re playing our part in preserving our environment.

Our closures are partly made from sugarcane which is a renewable resource that can be sustainably planted and harvested. This reduces over-reliance of fossil-based alternatives that put pressure on the earth’s finite resources. 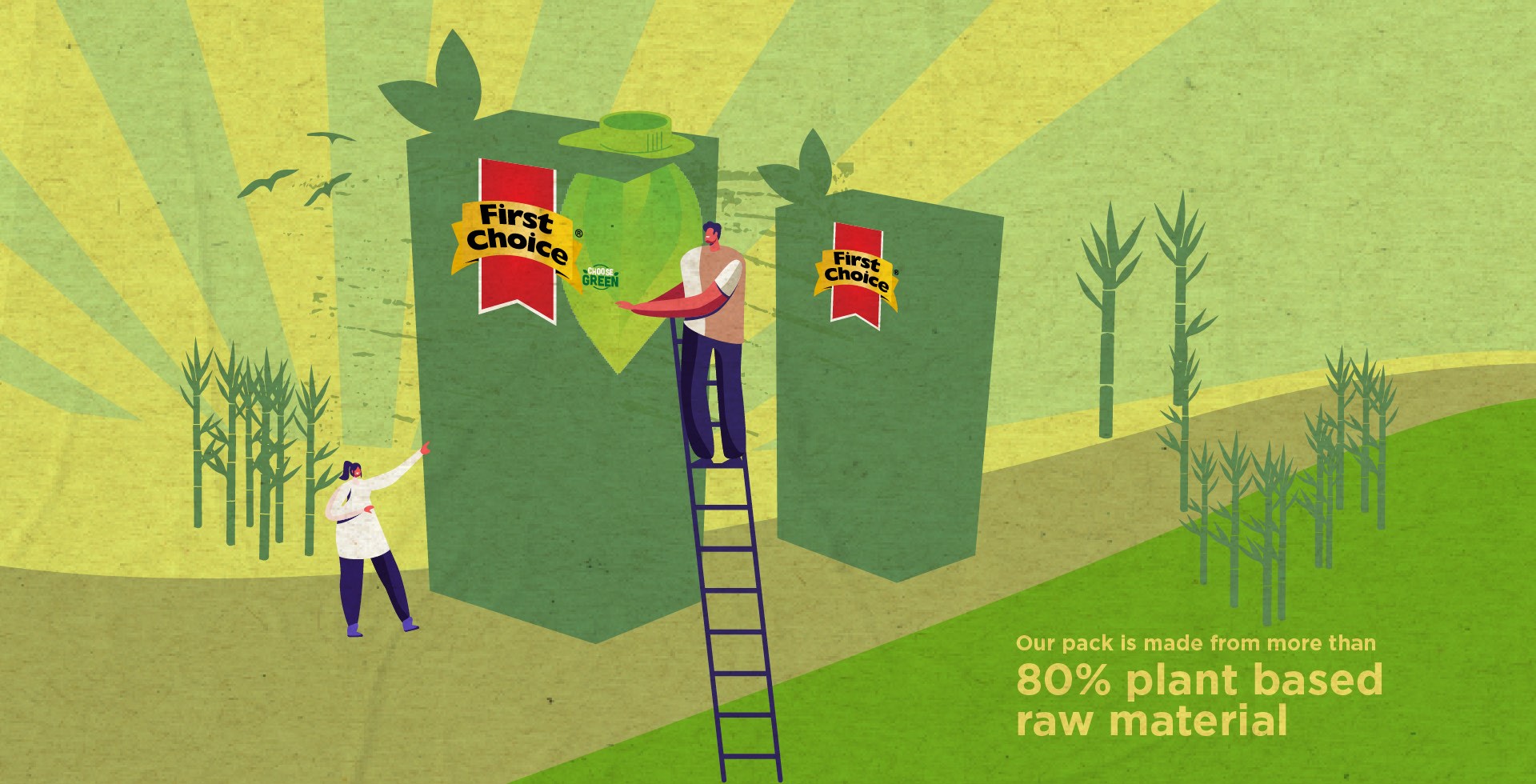 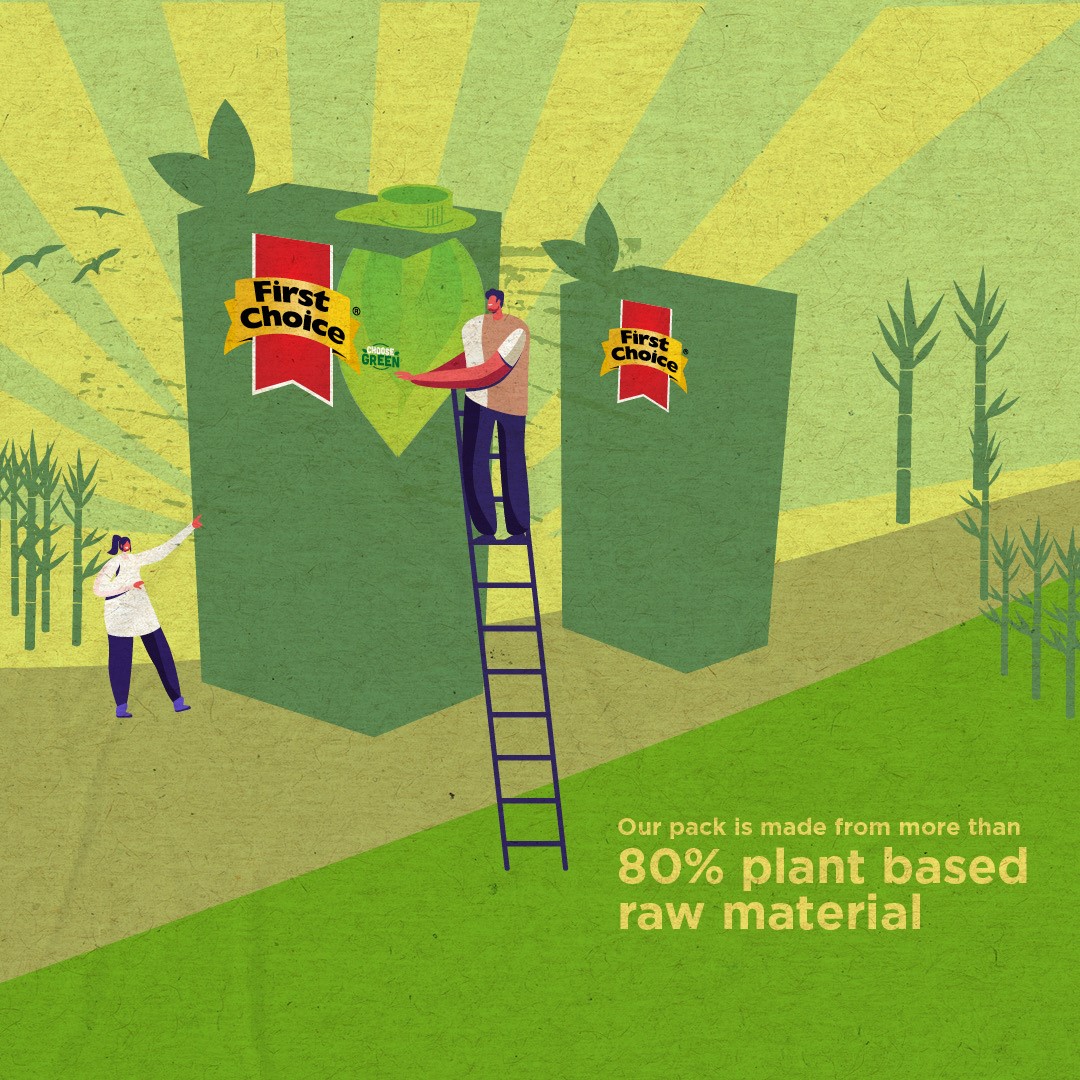 Layers of our milk cartons are made from plant-based material sourced from FSC forests and sustainably grown sugarcane. Through this we have increased the plant-based content of our packaging to more than 80%.

Responsibly sourced paperboard is combined with aluminium foil and polyethylene to make our state-of-the-art packaging. This multi-layered approach means that our packaging protects against oxygen and light to maintain the nutritional value of our products, keeping our sensitive dairy products safe.

The FSC logo signifies that the paperboard material used comes from responsibly managed forests and other controlled resources, which is environmentally appropriate, socially beneficial and economically viable. Further, the forests that we source from are continuously growing as new trees replace the ones that are harvested.

Our hard work and commitment to making our business and environment more sustainable for all, led us to change our packaging and in 2019 we opted for bio-based closures and packaging. This means that our closure and the polyethylene film used in our cartons are created using a renewable resource–sugar cane. When combined with the paper board this brings the renewability content of the pack to more than 80%. By increasing the renewability content of our packs we have successfully reduced the carbon footprint of our package by 15% compared to the previous packaging format. When renewability goes up, our carbon footprint goes down! 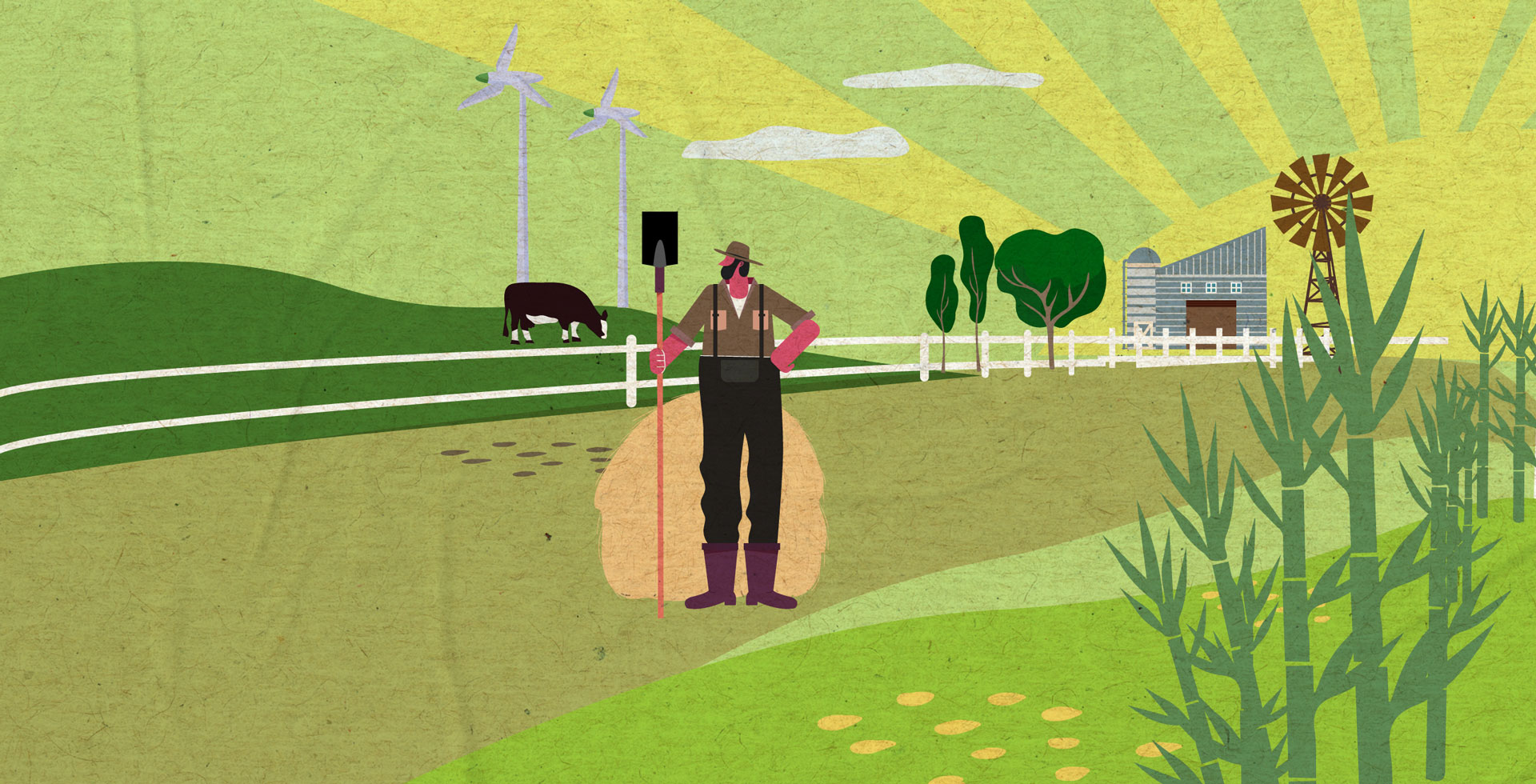 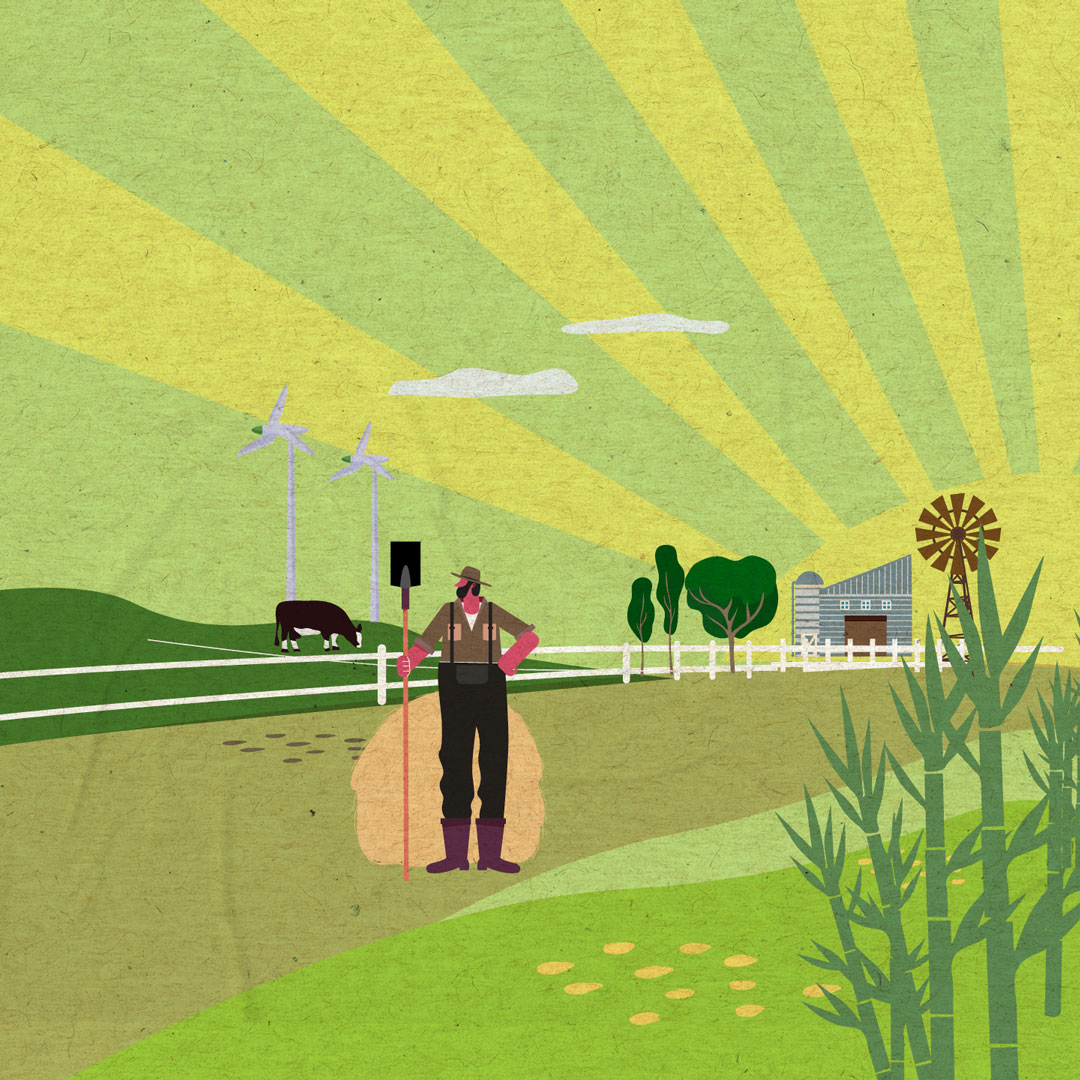 But it’s more than just closures and accreditations that make our packs unique.

Sustainable dairy farming is of the utmost importance to Woodlands Dairy because the farm is where the production of milk begins and the belief that the pursuit of business success should be in balance with making the world a better place.

We have implemented the Woodlands Dairy Sustainability Project in partnership with Trace & Save. This project aims to assist all of Woodlands Dairy’s milk producers to become more economically sustainable amongst other things.

Next time you pick up a First Choice milk pack, you’re not just picking up a box because it’s more than just a box. It’s a way to create a meaningful impact on the environment. 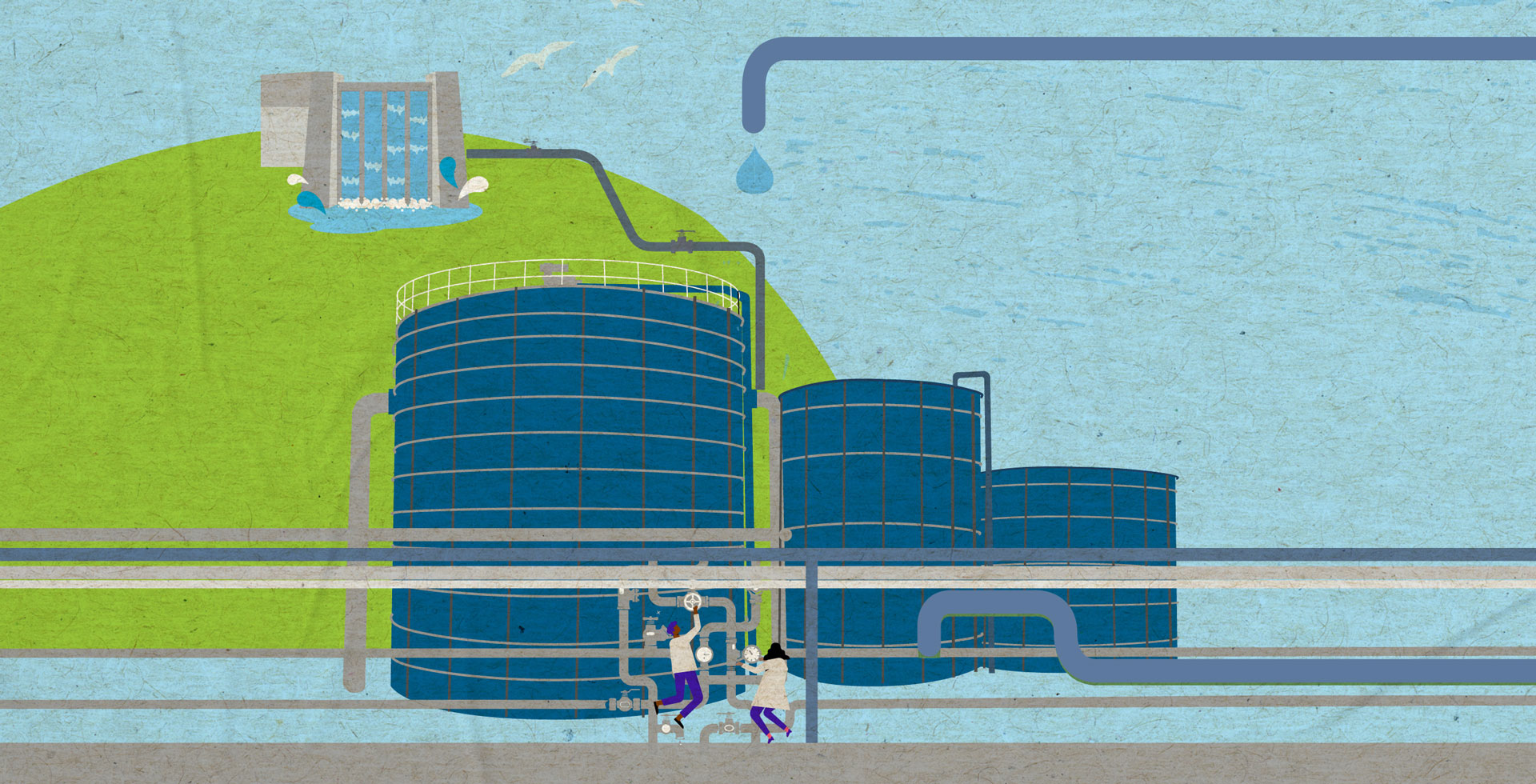 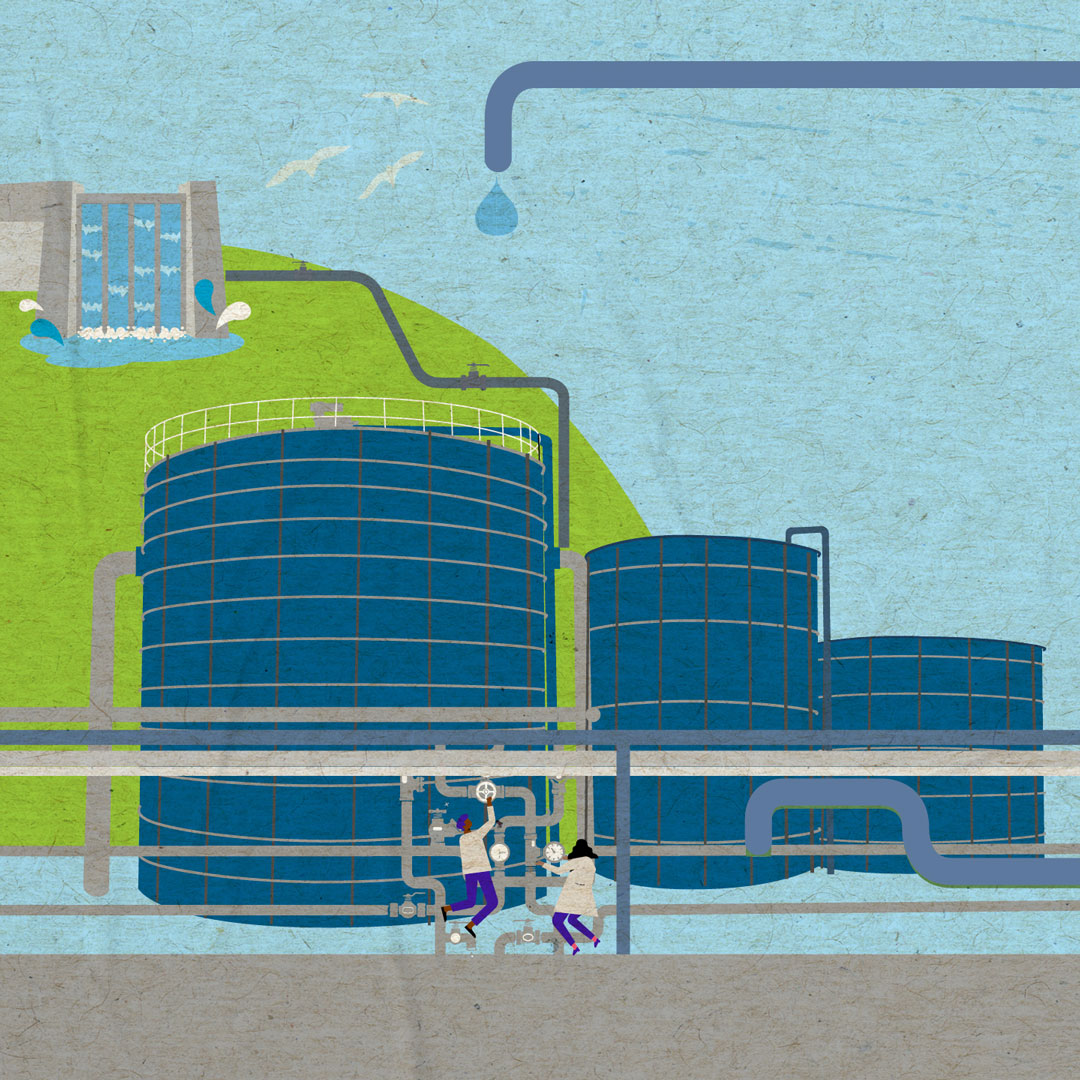 Early in 2017 we implemented our own on-site wastewater treatment plant.

Our resource recovery plant decreases our impact on local water resources by reducing our intake of municipal water by over 37%, thereby ensuring greater water security for other residents in the area.

Reverse osmosis is used to purify the water for washing in the factory. Approximately 60% of water used in the plant is recycled.

The sludge from the plant is then taken to the farm to be used as fertiliser. 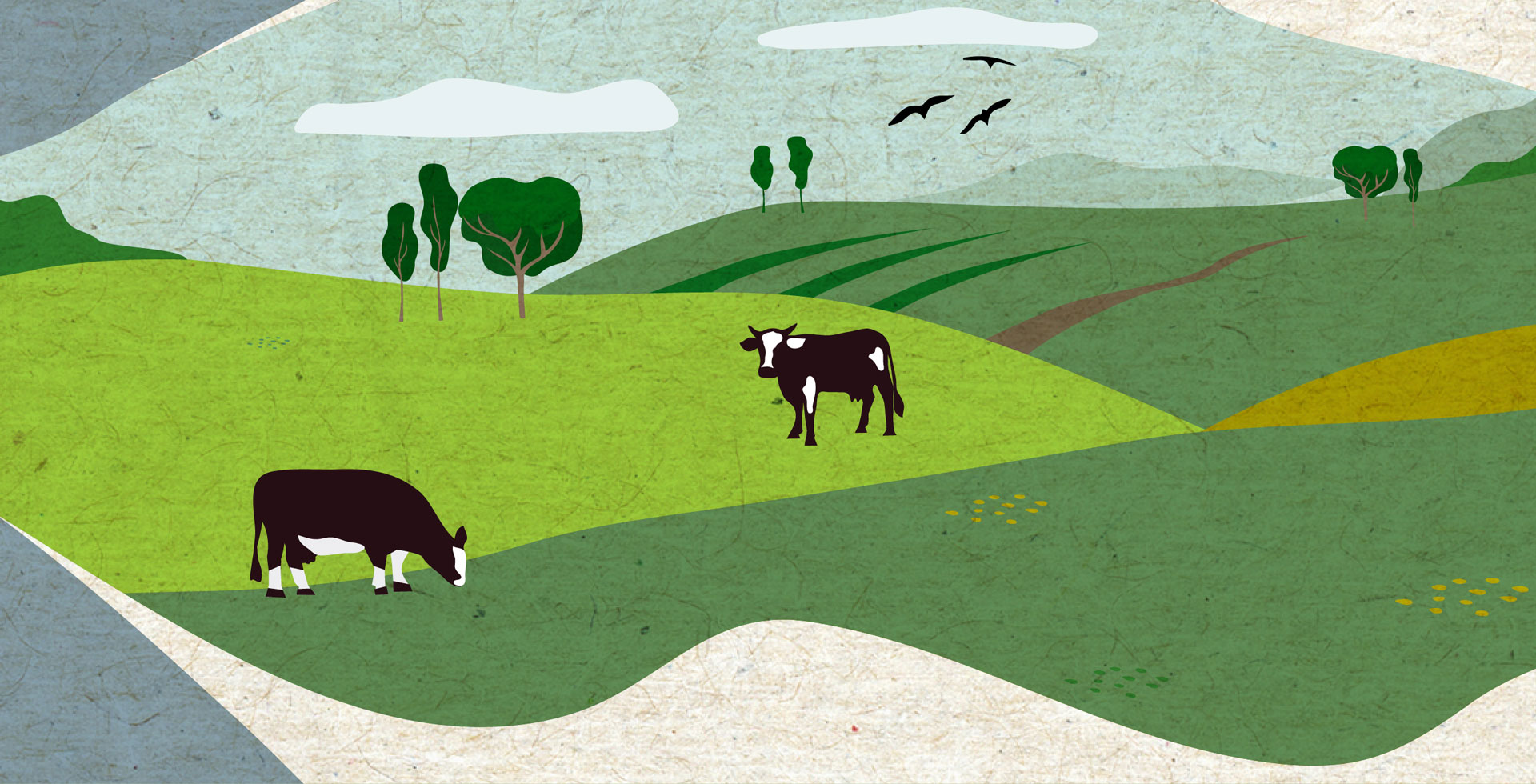 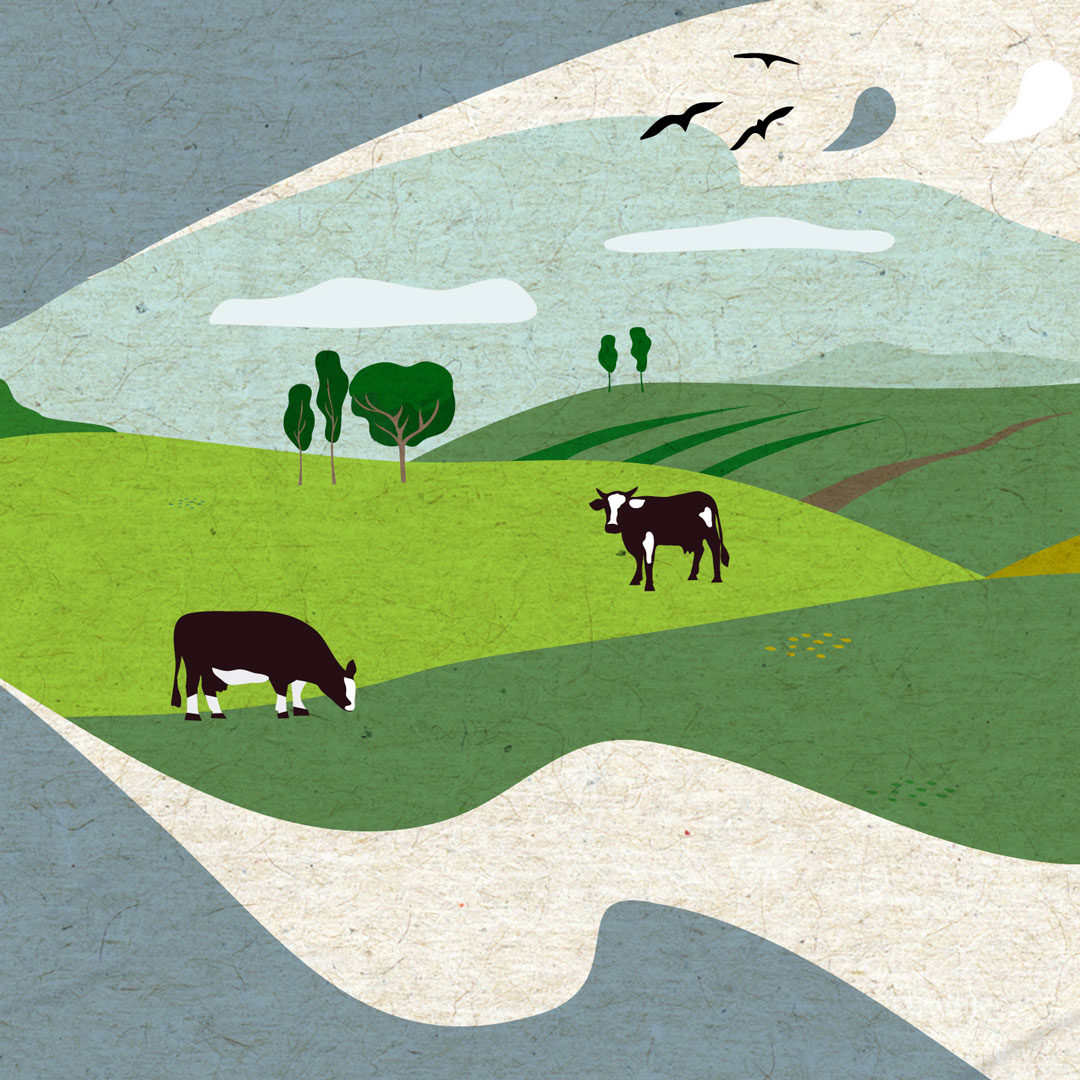 In 2013 we identified an opportunity in our business processes that would allow us to support and develop local entrepreneurs.

Because our staff members a required to attend work in clean overalls daily, Woodlands Dairy played a contributing part in helping two locals launch their laundry service (One Time Laundry) by purchasing equipment and premises that would allow them to clean and deliver tidy overalls to our plant.

We also launched our Umthombo Enterprise Development Initiative which provides a platform to create economic and social growth opportunities for women in the Nelson Mandela Bay townships. 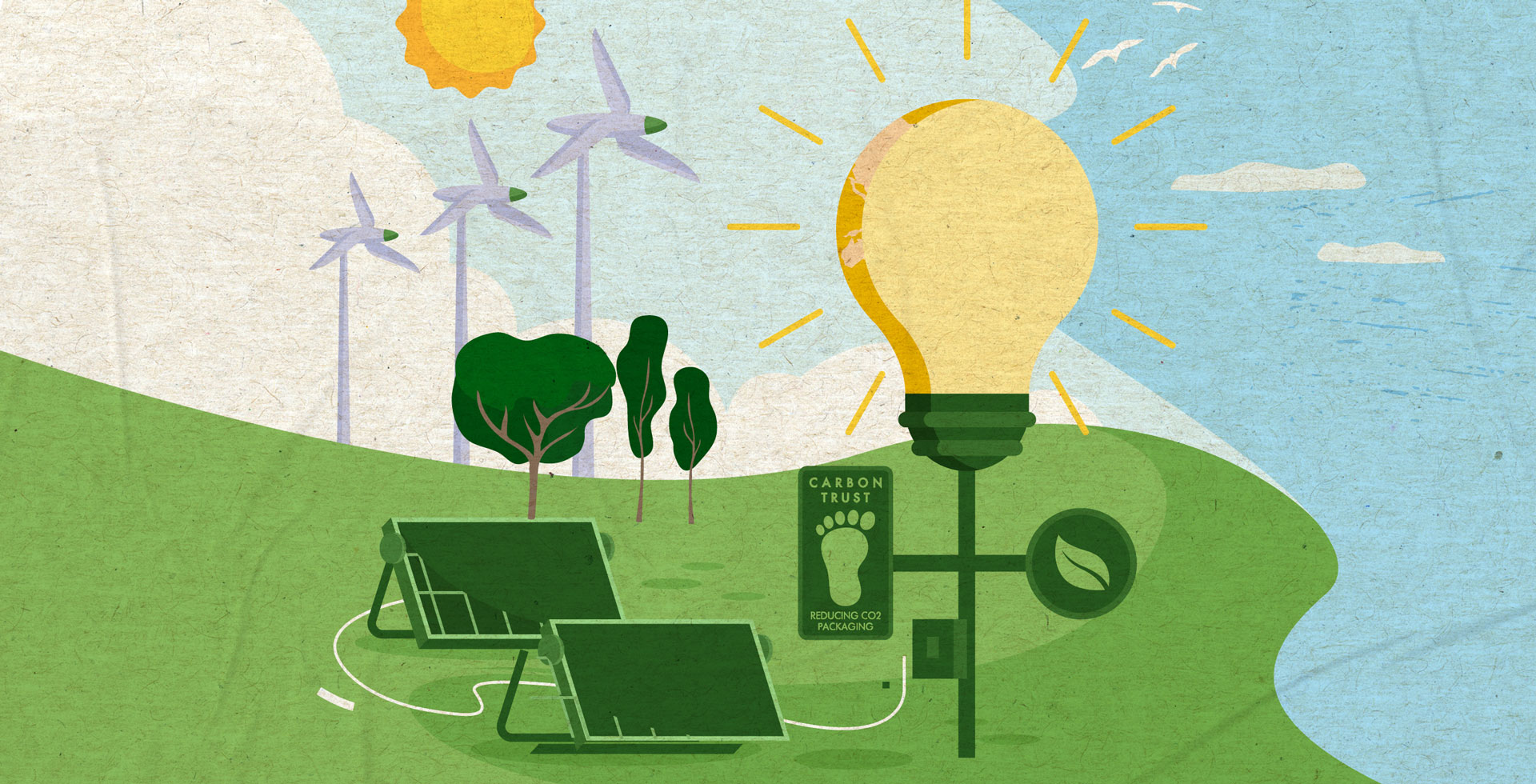 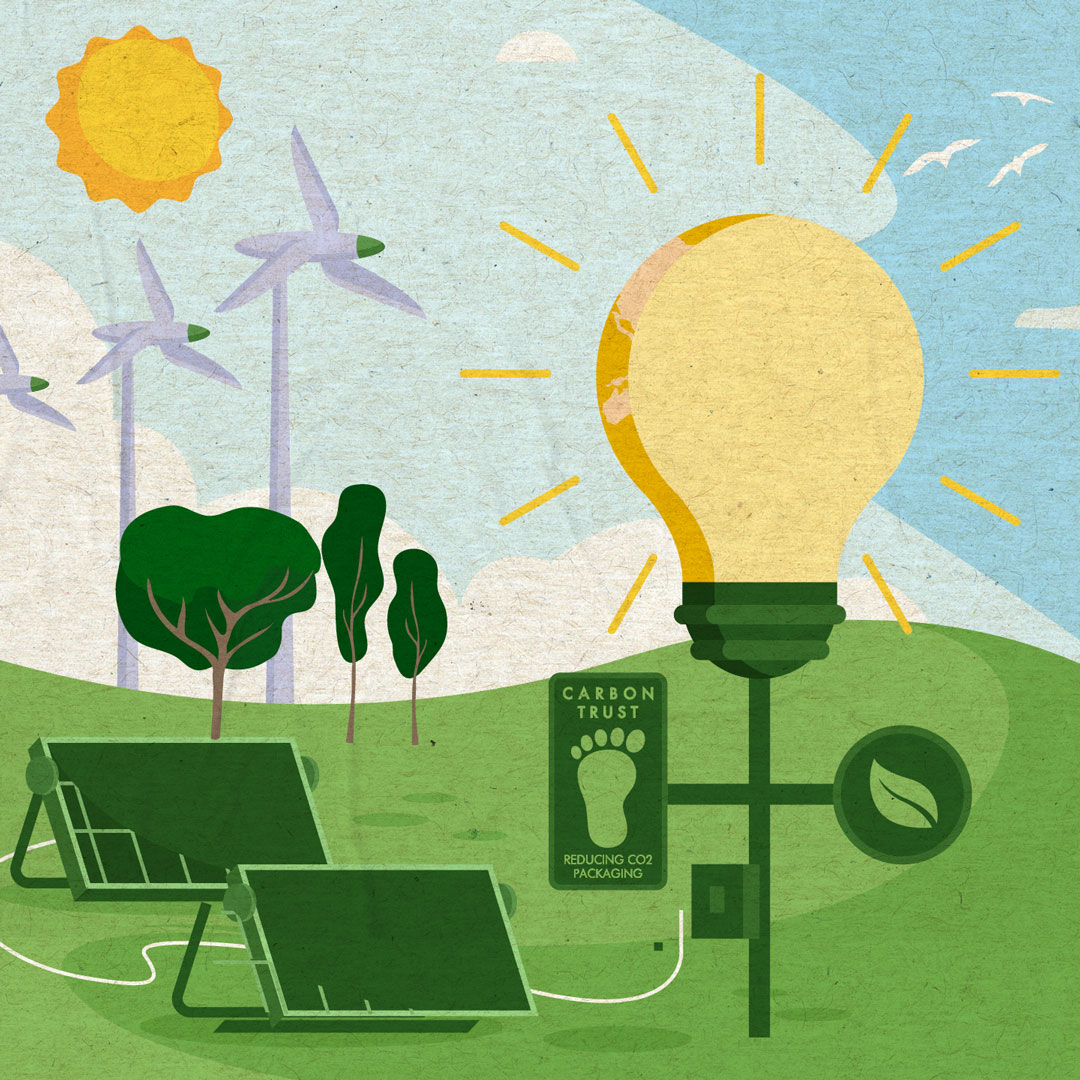 We are committed to becoming a good energy consumer, which is why over the last 7 years, we’ve implemented and driven large and small-scale initiatives that have significantly decreased our carbon footprint and reduced our consumption of steam and electricity.

In 2016, we implemented a biomass boiler which uses wood chips that are composed of leftovers wood material. The boiler is a sustainable fuel source and is a low carbon heating system.

Using the boiler allows us not to produce carbon dioxide emissions that harm the environment.

A total reduction of Co2 per 1000 litres of product produced over the past 7 years amounts to 71.7%. 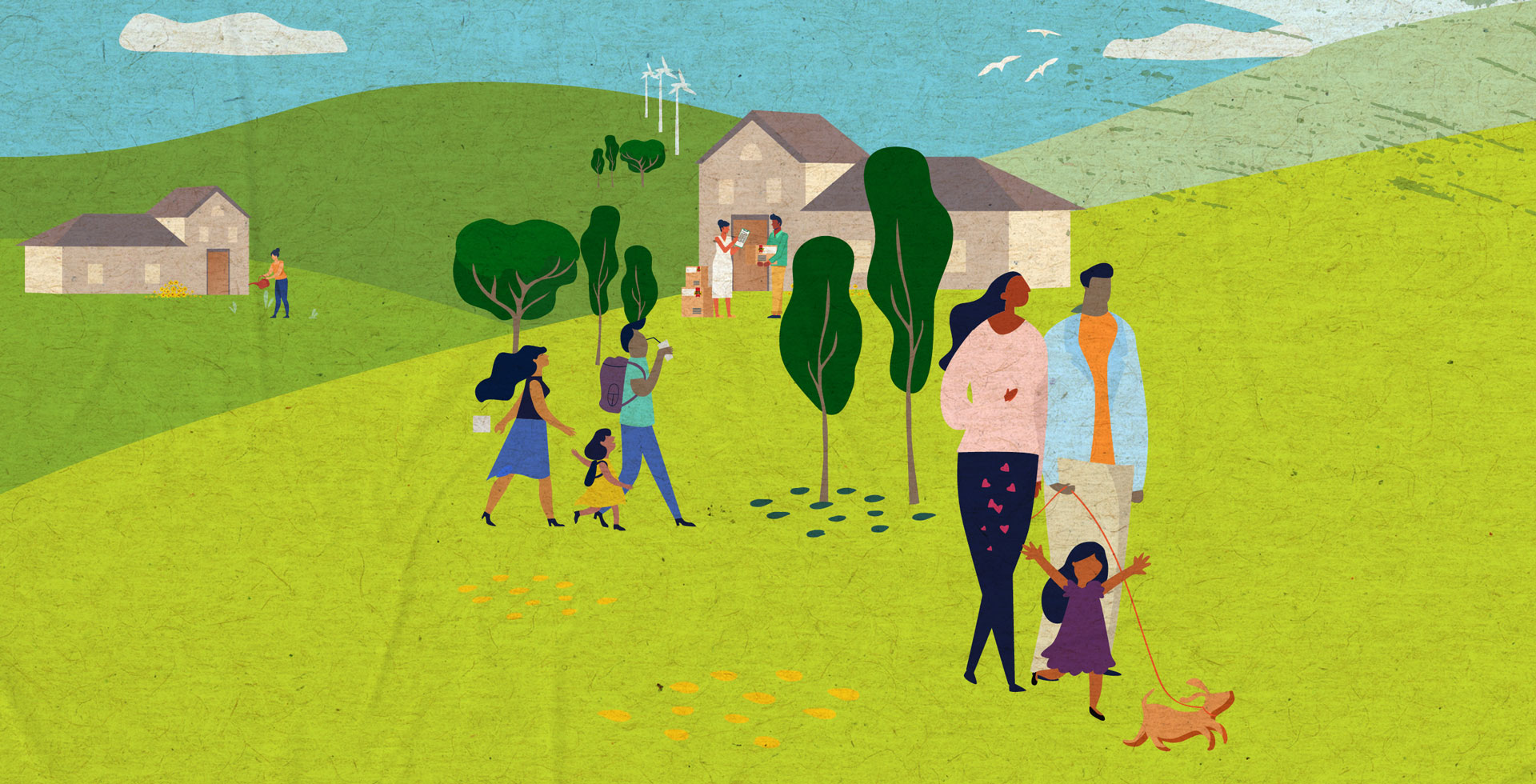 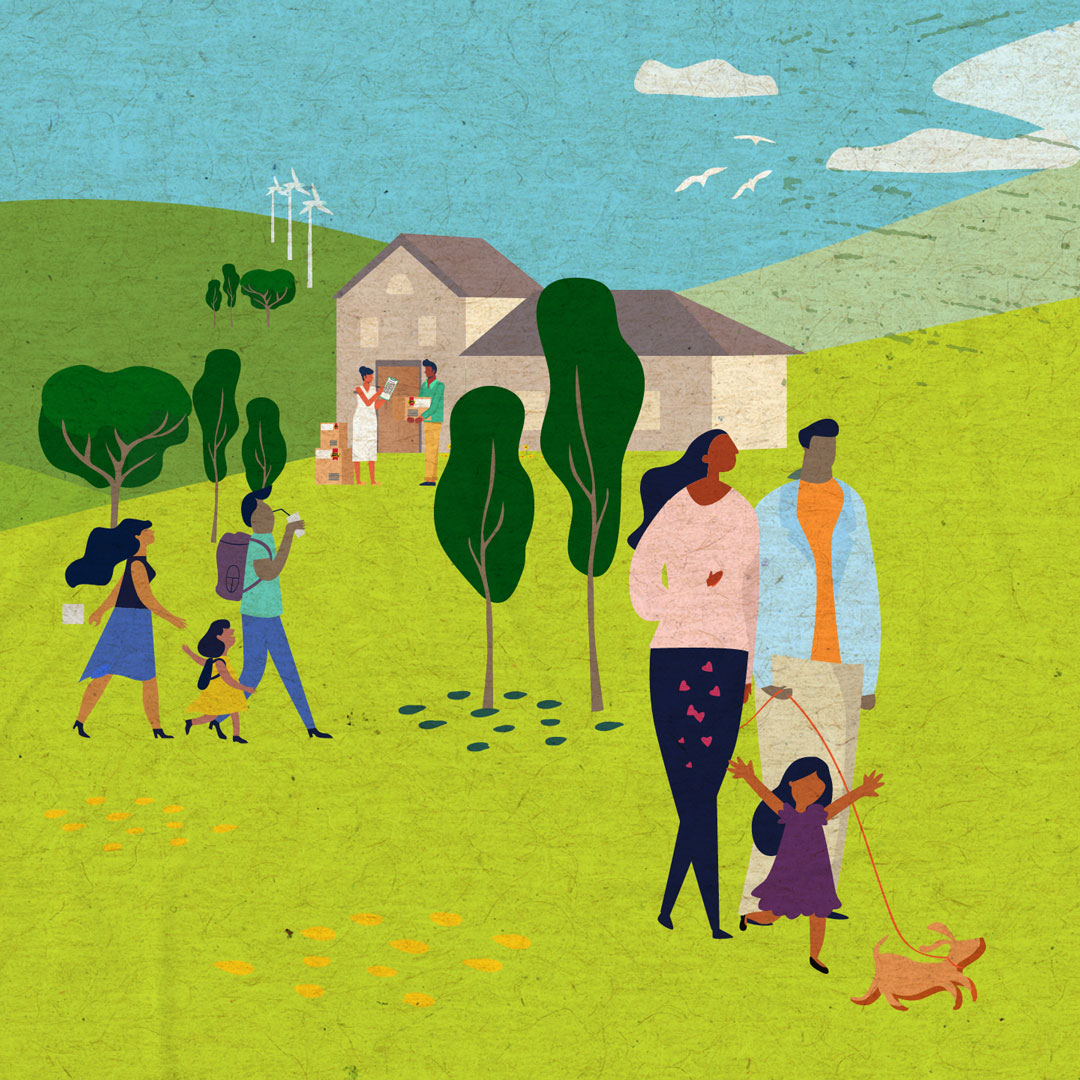 Poverty has many dimensions, but its causes include unemployment. At Woodlands Dairy, not only do we employ approximately 1400 people, who in turn stimulate the local economy but we also make use of locally sourced suppliers around the Eastern Cape region.

Our Umthombo Enterprise Development Initiative ensures growth and prosperity for all, based on people, product, processes, sustainability and the environment. Eleven businesses and 132 community members are benefiting from the initiative. 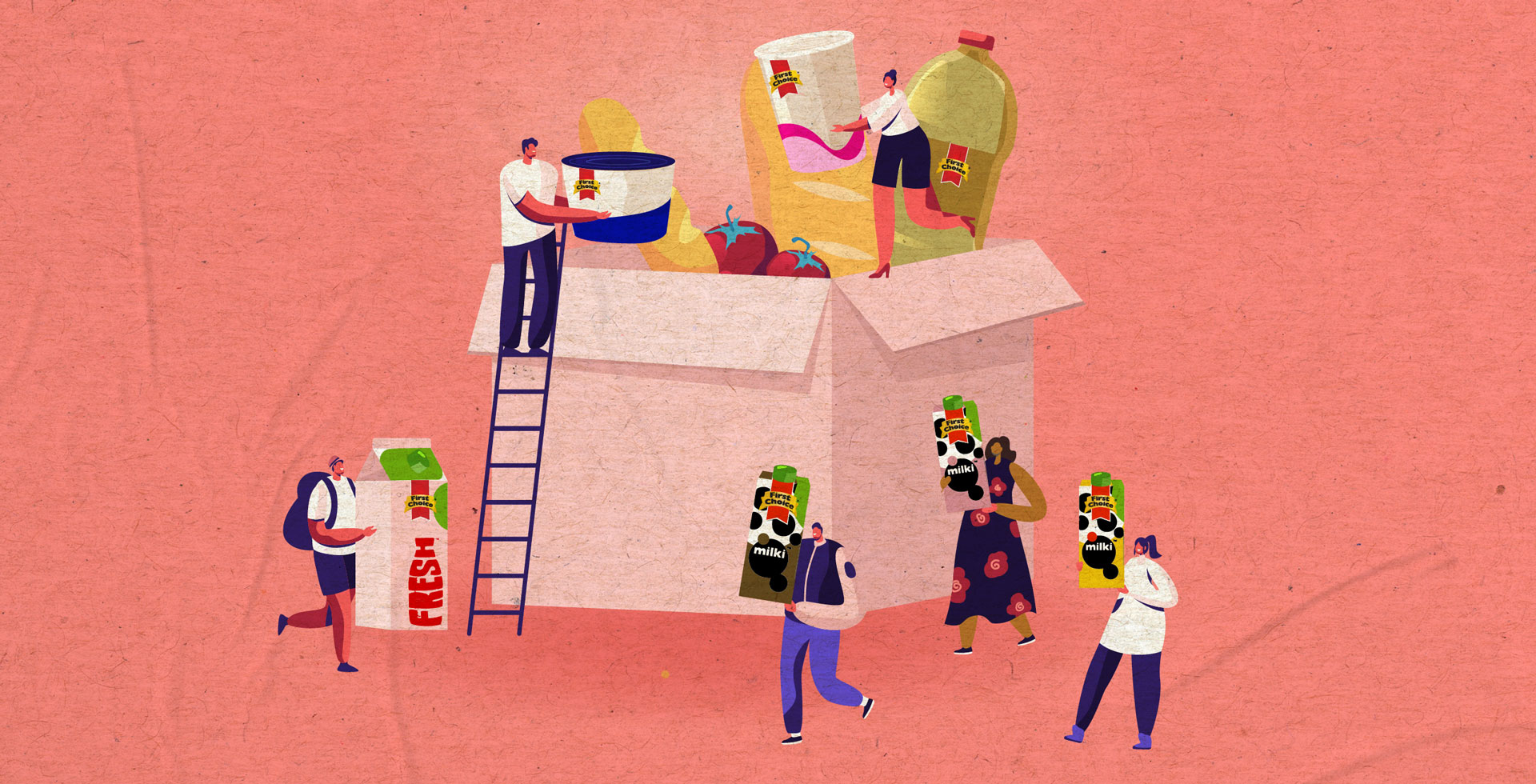 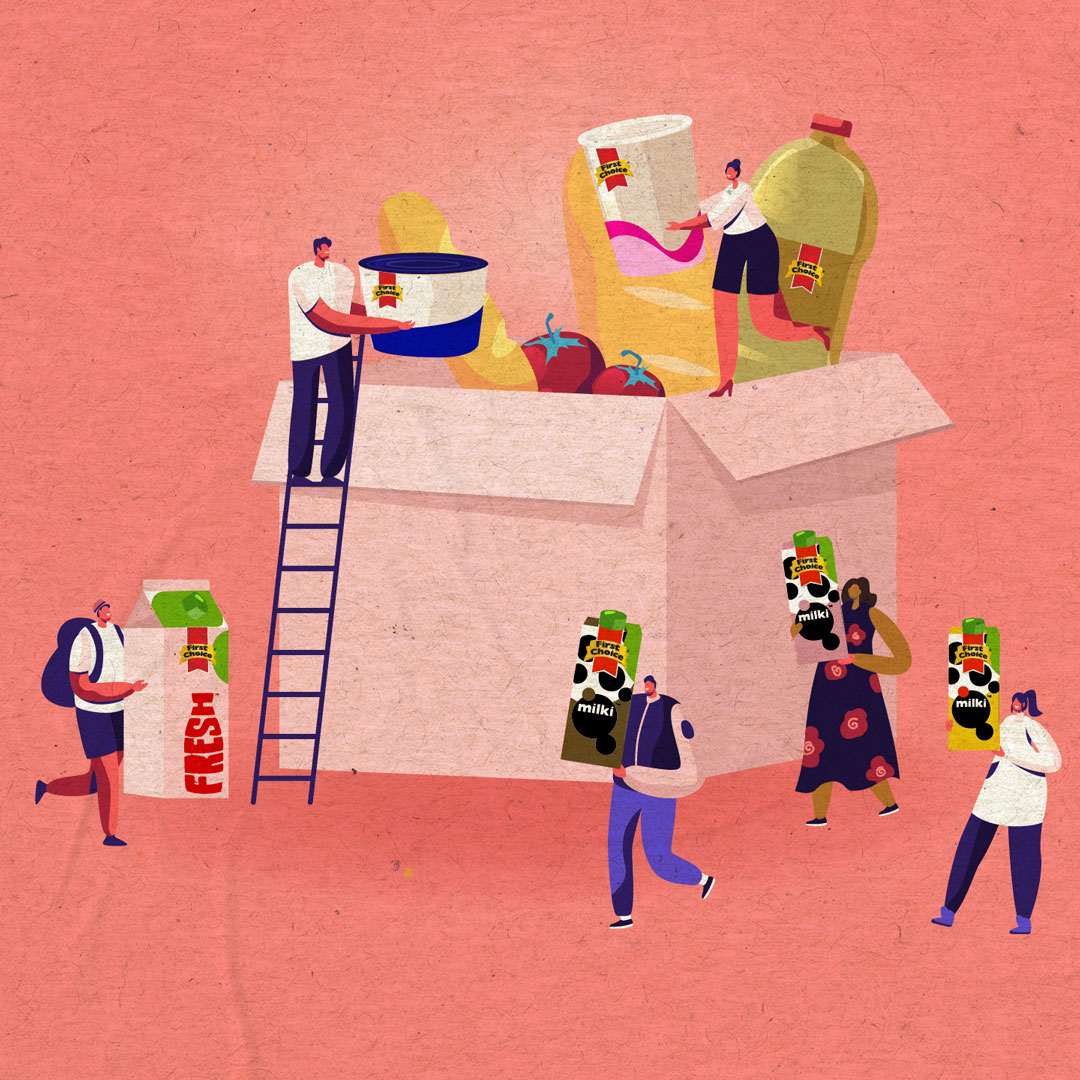 We support five feeding schemes in the local area, focusing on the youth & the elderly. We also fund various community projects in the Kouga area. The 23 projects range from supporting soup kitchens with monthly groceries, maintaining a pre-primary school built by the company and its partners, as well as purchasing craft machinery, supplies for the elderly and many more. 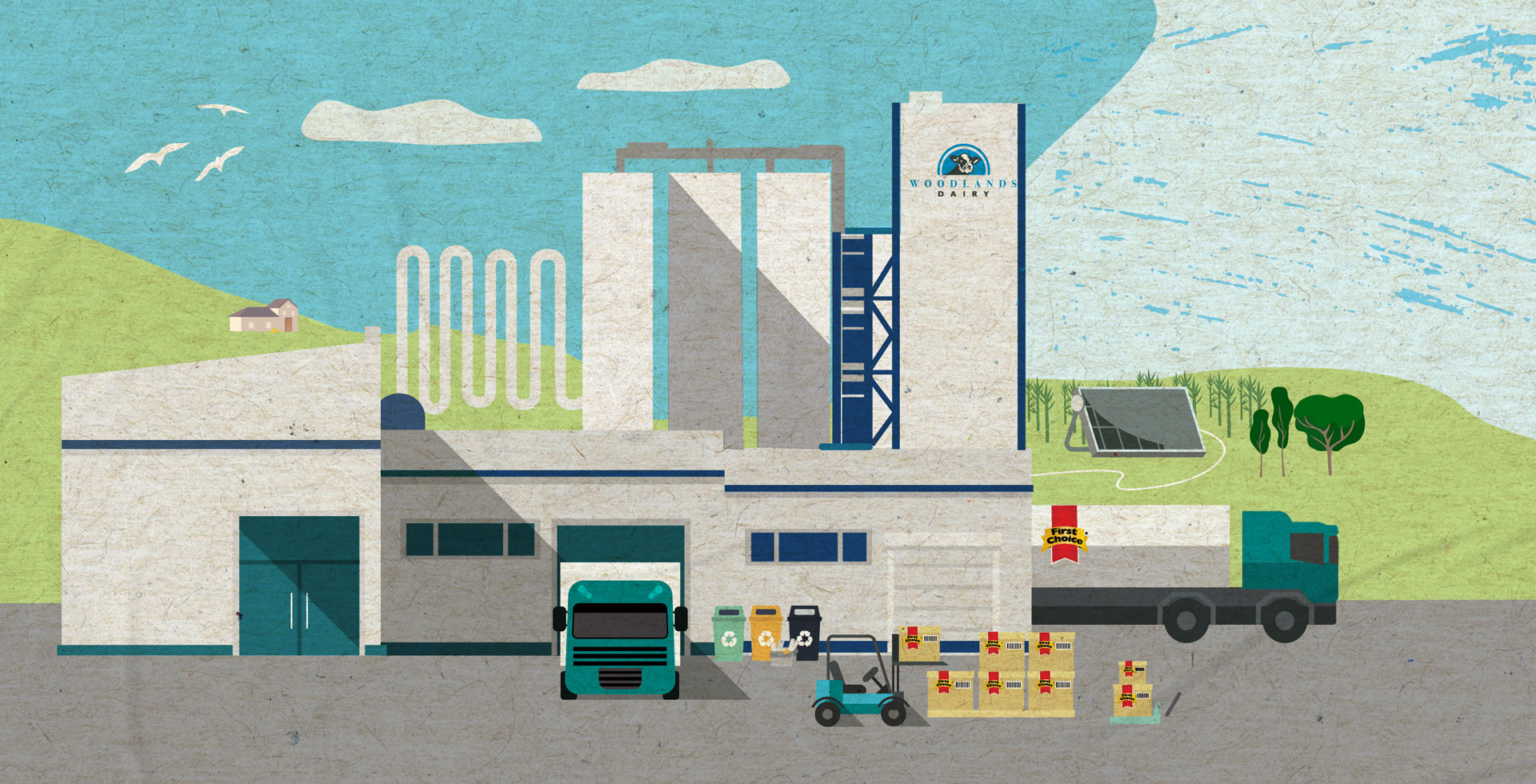 As part of our drive to educate both employees and the community The Clean-Up Your Hood for Good initiative was launched to create an ongoing awareness of pollution and recycling in the local community as well preserving our resources.

By 2019 we had installed 49 waste bins in the Humansdorp and Jeffery’s area. In 2020 an additional 20 bins had been installed and we will continue to roll out this initiative in the region.

Creative waste management strategies play a crucial role in helping cities and communities to reduce their waste-footprint and their environmental impact. Packaging waste is part of the manufacturing process at Woodlands Dairy and in 2019 recyclable waste amounting to 750 tons was generated from the plant. All of this waste was recycled through the Waste Trade Company. Recycling stations were also implemented all over the Woodlands Dairy facility. 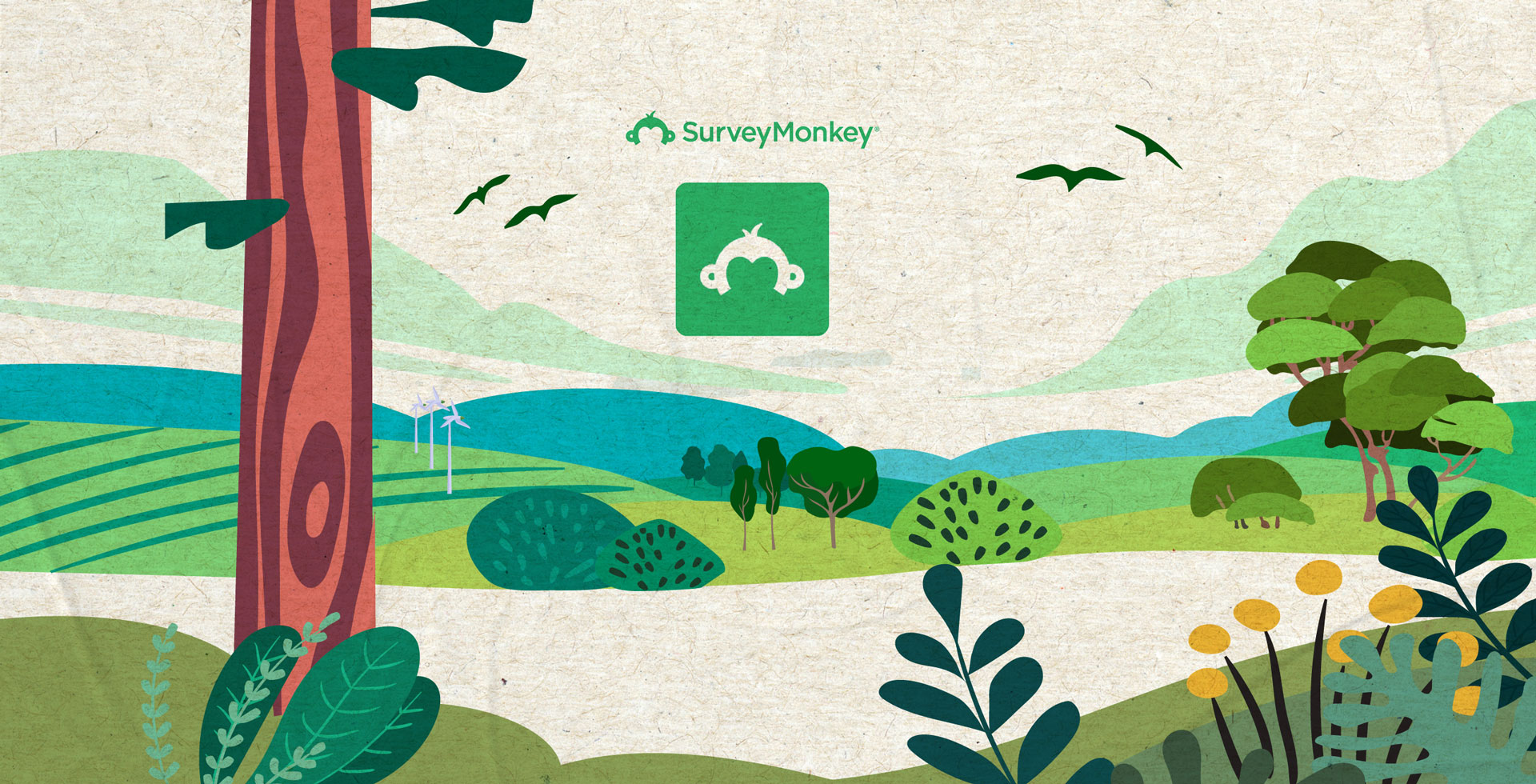 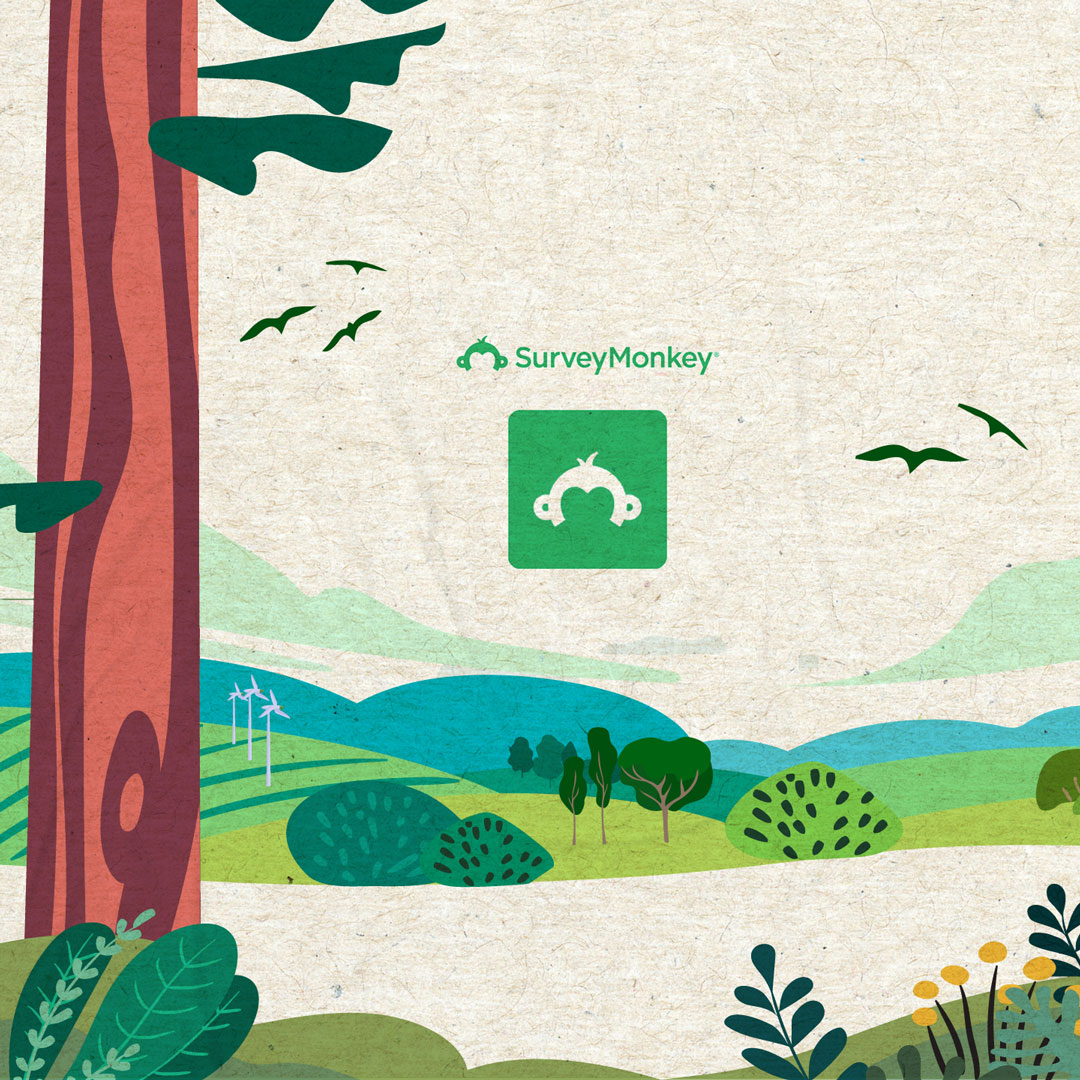 Find out how Woodlands Dairy has been working towards a more sustainable future since 2012. #NewNorm